"Vaporizes infantry and transports them too. It's a love-hate relationship, don't judge." 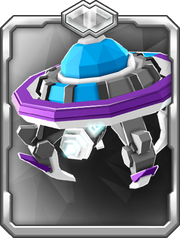 The Abductor is a rare unit unlocked in Glacier Gorge.

Destroy troops with the ABDUCTOR.

The Abductor has low damage, making it hard to do without assistance. Any other unit will help the Abductor, but salvo units can also shred armor.

The Abductor has 262 health and 105 damage at level 3, destroying these units in one shot, ignoring armor or evasion: