"Yes, she flies and breathes fire, but she's not crazy about gold. Ash is all about bucking stereotypes." 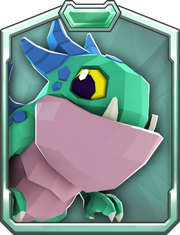 Ash is the last SENSO in the game, unlocked in Meowdieval Mayhem.

Ash is a flying, mobile unit with high siege bonus. Dealing low damage, Ash is not suited for regular combat. Instead, she excels at sieging while your other units pressure another objective. Escorting Ash to the enemy SENSO-Gate as you would a Siege Tank is a handy strategy to deal direct damage.

Ash has a very low damage output, though her high mobility can help you swoop in for the kill. Often times your enemies will have to be weakened beforehand.

Ash has 315 health and 79 damage at level 3, destroying these units in one hit, ignoring armor or evasion: