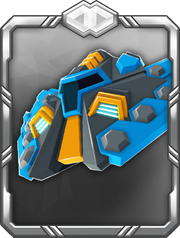 The Bomber is an epic unit unlocked in the Prologue.

The Bomber is a high health unit that deals area damage. Combining its area damage and siege bonus make the Bomber a great tool for clearing out buildings and any enemies trying to defend those buildings. The Bomber can also be used to clear out grouped up enemies with its area damage.

The Bomber's achievement is:

Damage two or more enemies with a single BOMBER attack.

There should not be much difficulty in the achievement, but some players may like to spread out their units and to combat that, use Phantasmo and Brutus to move enemies closer together.

The Bomber has 249 health and 105 damage at level 1, blowing up these units in one attack, ignoring armor or evasion: