"He's got an eye for weak points in armor. Call it the 'Sixth SENSO'." 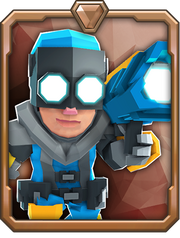 The Boomer is a common unit unlocked in Twin Temples.

The Boomer is a cheap and fragile unit that has salvo. The Boomer has the highest damage out of all low-cost units which makes it a menace against enemies. Adding in its salvo trait enables the Boomer to deal heavy damage to any target. In exchange for its high damage and low cost, the Boomer has very little health, being killed by all units except those with low damage, such as the Scout.

The Boomer's achievement is:

Shred armor with the BOOMER.

This achievement will only progress if your opponents are using armored units or SENSOs, but when they do pop up, make sure the Boomer takes the first attack.

The Boomer has 105 health and 132 damage total at level 5, destroying these units in a full attack, ignoring armor or evasion: