"Knocks you back. Comes in like a wrecking ball. All he wants is to break your walls." 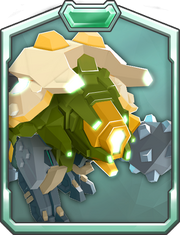 Brutus is the fourth SENSO, unlocked in Sandy Shores.

Knock back enemies with BRUTUS.

As long as you regularly attack enemies, this achievement should be easy. However, if the enemy you attack is not able to be pushed, it will not count toward this achievement.

Brutus has 301 health and 79 damage at level 3, destroying these units in one shot, ignoring evasion: