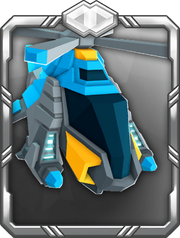 The Chopper is a common unit unlocked in the Prologue.

The Chopper is a highly mobile ranged salvo unit. Its salvo trait makes it suited for shredding armor for the rest of your troops, or gaining double bonus from damage boosts such as Warp or Nemo. On the other hand, its exceptional effective range makes it perfect for pressuring entrenched units, forcing them to either be destroyed, or losing an attack.

The Chopper's achievement is:

Shred armor with the CHOPPER.

This achievement can be difficult to do if your opponent isn't using any armored troops. When they are using armored troops, make sure the Chopper attacks first.

The Chopper has 157 health and 118 damage total, blowing up these units in a full attack, ignoring armor or evasion: