"Transports everything. Plus, Chuck features no carry-on fee and free drinks." 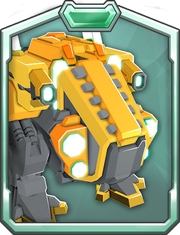 Chuck is the sixth SENSO in the game, unlocking in Cloud Citadel.

Chuck is a low damage, armored unit. Chuck's main feature is that it is a transport unit, but even more so that it can launch allies up to 3 tiles away when unloading. Having the ability to launch units gives any unit on your team much more utility. There are many uses for having a pseudo-Warp in your deck, such as moving a unit straight from your SENSO-Gate to the opponent's.

Launch an allied unit with CHUCK.

Chuck's achievement is simple to progress, and that is by using its ability frequently. Alone, Chuck does not deal much damage, so making use of its transport is key.

Chuck has 334 health and 79 damage at level 3, destroying these troops in one hit, ignoring armor or evasion:

Chuck has received any major changes yet.