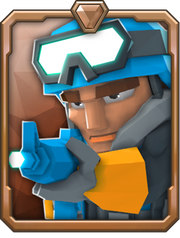 The Grunt is a common unit unlocked in the Prologue.

The Grunt is a low cost mobile unit with low stats. The Grunt has a very low cost, making it ideal for finishing off enemies, blocking tiles, or sieging. Additionally, its exceptional movement makes the Grunt a viable candidate for rushing entrenched units.

Destroy a troop with 6 SENSO-Gel or more with the GRUNT.

Most 6+ Gel units have high health, so often another troop is needed for the Grunt to finish it. Salvo units such as the Chopper can shred armor off enemies for the Grunt, for example.