"A whole lot of firepower on a pretty big plane. Gunplane just didn't sound as cool." 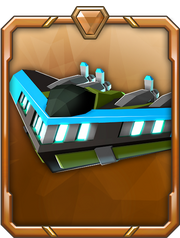 The Gunship is a rare unit unlocked in Sandy Shores.

The Gunship is an expensive mobile unit with high health and damage. Being classified as a high movement and high damage unit, the Gunship is a great brawler against siegers such as the Longbow, or to finish off medium health units such as the Chopper. However, the Gunship does not come with anything else; it is a plain unit. Medium ranged units will easily tear the Gunship apart while being safe at range.

Take out an enemy in one shot with the GUNSHIP.

The Gunship already has a very high base damage, one shotting medium health units. If your opponent is protecting those units with more durable ones, using salvo units can help shred their armor.

The Gunship has 197 health and 170 damage at level 3, destroying all units in one shot, ignoring armor or evasion, EXCEPT for these units: