"He's basically a walking mountain. A mountain with a minigun." 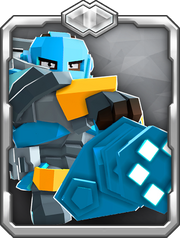 The Heavy is a rare unit unlocked in the Prologue.

The Heavy is a cheap bulky unit that can stay on the battlefield for a long time. Its medium health combined with armor make the Heavy a sticky unit, suited to protecting fragile backline units. Its hard-to-remove nature also benefits it when sieging, as the enemy will have a hard time removing it if they do not have salvo units.

Block an attack with the HEAVY.

This achievement is easily progressed just by using the Heavy in battles. However, if your opponent is ignoring the Heavy due to its low damage, try moving into an offensive position near their SENSO-Gate to provoke an attack.

The Heavy has 164 health and 105 damage at level 3, terminating these units in hit, ignoring armor or evasion:

The Heavy has not received any major changes yet.