"Quick and deadly. Go on, ask him to do a barrel roll." 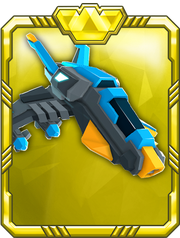 The Jet is an epic unit unlocked in the Prologue.

The Jet is a mobile, lethal unit that can fly. Its high movement and high damage make the Jet a powerful pressuring tool against important enemies. Most units will be killed by one attack from the Jet. However, the Jet does not have high health and requires to be in melee range, so it has a high chance of being destroyed after it attacks.

The Jet's achievement is:

Attack an enemy on deploy with the JET.

This achievement is easier to do than others since the Jet has such high movement, but if your opponent starts to siege your Extractors from a safe distance, Phantasmo can bring them closer and into deploy range.