"Switches positions with his target. His favorite movie is 'Trading Places'." 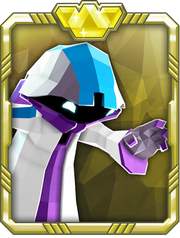 The Mastermind is an epic unit unlocked in Glacier Gorge.

The Mastermind's achievement is:

Swap position from maximum range with the MASTERMIND.

As this is the Mastermind's main power, this achievement can be easily completed just through intended use.

The Mastermind has 157 health and 79 damage at level 1, destroying these units in one shot, ignoring evasion: