"Heals adjacent allies at the start of each turn. Med-Bot is all about love, baby." 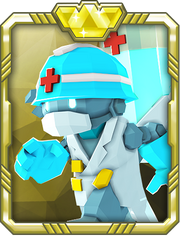 The Med-Bot is an epic unit unlocked in Sandy Shores.

The Med-Bot's strengths lie not in its damage, but its healing trait. At the start of each turn, the Med-Bot heals nearby allies, restoring their lost health. It does not heal armor or evasion back. The Med-Bot works well with high health units such as SENSOs.

Heal health with the MED-BOT.

Positioning your Med-Bot close to as many damaged allies as possible will vastly increase the progress of this achievement. However, sometimes your opponent will want to always destroy a unit over leaving it injured. To solve this, let your units get counterattacked.

The Med-Bot has 157 health and 52 damage at level 1, not killing any unit in one shot. However, the Med-Bot can be instantly destroyed by these units: