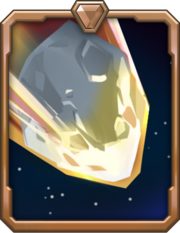 The Meteor is a common super unlocked in Twin Temples.

As a super, the Meteor is not a unit, but comparable to a spell in other games. It can be called anywhere on the battlefield, and deals area damage to all enemies caught in its impact. SENSO-Gates and Extractors take halved damage from the Meteor.

The Meteor's achievement is:

Hit two or more enemies with a single METEOR strike.

As long as your opponent has their units grouped up, you should be fine. However, if they are spreading their units out, use Phantasmo or Brutus to reposition them into the Meteor's path.

Meteor does 105 damage at tournament standard, blowing up these units in one strike, ignoring armor or evasion: