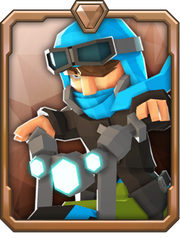 The Motorbike is a common unit unlocked in Sandy Shores.

Similar to the Scout, the Motorbike is a more powerful unit at the cost of the scavenger trait. The increased stats make the Motorbike able to oneshot troops the Scout couldn't. Alternatively, the Motorbike's mobility can be used to rush Extractors straight out of the SENSO-Gate. Compared to the Grunt, the Motorbike offers higher movement, but at a higher cost. Otherwise, both have identical health and damage.

The Motorbike's achievement is

Destroy troops with the MOTORBIKE.

The Motorbike should have no problem destroying fragile units such as the Boomer or Ranger, but additional help is needed for the Motorbike to destroy medium and high health units.

The Motorbike has not received any major changes yet.