"A natural leader with a synthetic damage boost aura. Get in the friend zone!" 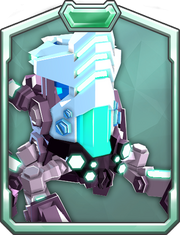 Nemo is the fifth SENSO in the game, unlocked in Glacier Gorge.

Nemo is a ranged unit that gives adjacent allies a damage boost. Nemo's damage aura can allow units to one-shot enemies they couldn't before. Additionally, salvo units benefit twice from Nemo, gaining double the boost. Nemo is best placed near salvo units or near siege units.

Nemo's low damage will not be enough to destroy units alone; other units must be used to weaken them before Nemo can deal the final blow.

Nemo has 334 health and 39 damage at level 3, not killing any unit in one shot. However, Nemo gives nearby allies and itself +39 damage, making other units stronger.