"She's an expert at avoiding damage, except when she's taking damage." 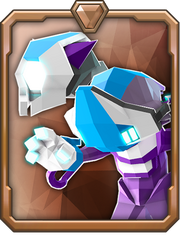 The Overseer is a common unit unlocked in Cloud Citadel.

The Overseer is a mobile, ranged unit with low damage; these traits in addition to its ow cost makes the Overseer a great option for finishing off enemies. Its counterattacks also deal 100% damage, unlike other units. However, the Overseer does not have high health and grants your opponent 2 Combo Power, which is above average for its cost.

The Overseer's achievement is:

Destroy troops with the OVERSEER.

The Overseer's damage is not enough to destroy most units in one shot, so to farm this achievement you must use additional units. The Motorbike, for example, has the same effective range as the Overseer, deals moderate damage, and is a melee unit.

The Overseer has 125 health and 105 damage at level 5, destroying these units in one shot, ignoring armor or evasion:

The Overseer has not received any major changes yet.