"Pulls you to him on attack. Has a penchant for theatrics (mostly making enemy SENSOs disappear). 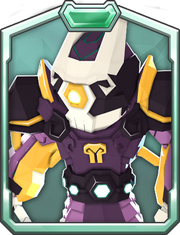 Phantasmo is the third SENSO, available in Riverfall Rise.

Phantasmo is an entrenched, ranged unit that can pull enemies out of position. When he attacks, the enemy is teleported to the closest tile that is not occupied to Phantasmo in that direction. Phantasmo with teleport armored units even if their armor blocks the damage. Phantasmo excels at displacing enemies and pulling them into the line of fire.

Pull an enemy from maximum range with PHANTASMO.

If you use Phantasmo, you should already be pulling enemies, which is Phantasmo's main purpose. Keeping Phantasmo in the back and your enemies close helps.

Phantasmo has 341 health and 79 damage at level 3, killing these troops in one hit, ignoring armor or evasion: