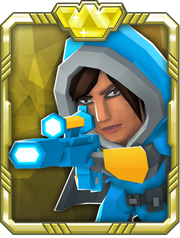 The Ranger is an epic unit unlocked in the Prologue.

The Ranger is an entrenched ranged unit that deals high damage. Her high range and damage can be used to siege buildings or destroy fragile units. However, her low health and lack of close range fire make her an easy target for enemies with an effective range of more than 5, as they can safely wait outside of her range, then attack her, often destroying her in a single attack.

The Ranger's achievement is:

Take down an enemy in one RANGER attack.

The Ranger has a high damage output, so most enemy units should be easy pickings for the Ranger. If your opponent is placing their units outside of her range, try using Phantasmo or Brutus to move them into her range. They can also move enemies away from the Ranger should they try to attack her.

The Ranger has 105 health and 131 damage at level 1, taking down these units in one shot, ignoring armor or evasion: