"Gets a bonus action on kill. Reading 'The Three Little Pigs' gets her going." 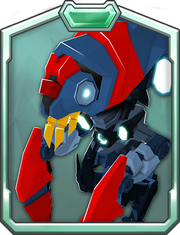 Reaper is a SENSO unlocked in Prehistoric Peak.

Reaper is a medium damage unit that gains an extra action if she kills an enemy. Note that this bonus action does not have to be taken right away; other units can be expended before Reaper acts again. Reaper's bonus action can be used for many things: moving back to safety, getting another kill, or repositioning. Reaper's single stack of armor gives her an extra bit of survivability. Reaper is a flexible unit, able to dominate the battlefield, but only if she can get kills.

Chain kill two enemies in one turn with REAPER.

Reaper has 315 health and 125 damage at level 3, one-shotting these units, ignoring armor or evasion:

Reaper has not received any major changes yet.