"Dodges the first attack every turn. Don't let him sneak up on you!" 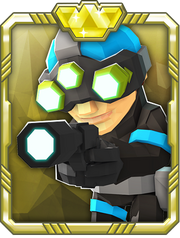 The Saboteur is an epic unit unlocked in Glacier Gorge.

The Saboteur is a very mobile, entrenched unit with very high damage. Its evasion trait makes the Saboteur more than a glass cannon, letting it dodge the first attack each turn. Evasion acts like armor, except it regenerates at the start of each turn. The Saboteur's high damage is perfect for pressuring objectives.

Evade enemy attacks with the SABOTEUR.

The Saboteur's evasion can be easily triggered by having enemies attack it. Putting the Saboteur near an important objective such the SENSO-Gate will force your opponent to destroy it, and therefore, removing its evasion.

The Saboteur has 79 health and 177 damage at level 1, destroying all other units in one shot, ignoring armor or evasion, EXCEPT for these units: