"The leather interior isn't standard, but the machine gun is." 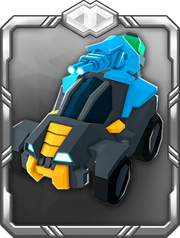 The Scout is a common unit unlocked in the Prologue.

The Scout is a cheap, mobile unit with the scavenger trait. The Scout's high mobility make it great for pressuring fragile backline enemies, since it can wait safely out of range and then attack. The scavenger trait can also be helpful in situations where your units have destroyed a durable unit, allowing a Scout to deal with the backline and gain extra Gel.

The Scout's achievement is:

Pick up Gel with the SCOUT.

You should be picking up Gel with the Scout already due to its scavenger trait, but this achievement is as easy as moving the Scout onto a Gel drop.

The Scout has 118 health and 85 damage at level 5, killing these units in one shot, ignoring armor or evasion: