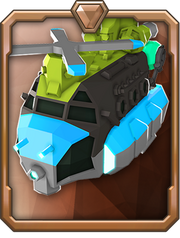 The Shuttle is a common unit unlocked in Sandy Shores.

The Shuttle's achievement is:

Transport an allied unit with the SHUTTLE.

The Shuttle has health at level 5, sturdy enough to not die in one hit from anything.