"Demolishes buildings in seconds. Builds dollhouses in his spare time." 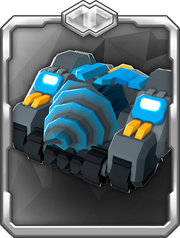 The Siege Tank is a rare unit unlocked in Riverfall Rise.

The Siege Tank is exactly what you think it is; a tank with siege bonus. The Siege Tank's high health and armor make it durable enough to not be instantly killed while attacking buildings. It is the perfect unit to destroy buildings due to its high siege bonus.

The Siege Tank's achievement is:

Deliver the final blow to a building with the SIEGE TANK.

The Siege Tank does not have enough firepower to one-shot a building (unless it is sufficiently underleveled), so other units must be used to weaken the building first. If there is a great deal of defense on one building, try pressuring the other ones.

The Siege Tank has 236 health and 79 damage at level 3, destroying these troops in one hit, ignoring evasion:

Community content is available under CC BY-NC-SA 3.0 unless otherwise noted.