"That's no moon. That's a giant propeller-driven dirigible with a lot of big cannons." 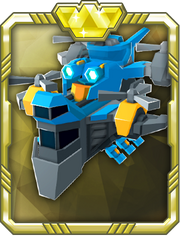 The Skyfortress is an epic unit unlocked in Prologue.

The Skyfortress is an expensive, long ranged unit with siege bonus. It is a powerful sieger, having a long range, siege bonus, and high health and damage.

The Skyfortress' achievement is:

Deliver the final blow to a building with the SKYFORTRESS.

The Skyfortress can already reduce Extractors to rubble if left ignored, so try pressuring another objective while your Skyfortress chips away.

The Skyfortress has 365 health and 235 damage at level 1, killing most units in one attack, ignoring armor and evasion. These units will NOT be killed in one shot.