"Behind the blaster he's a softie. Maybe that's why he never lets anyone get close." 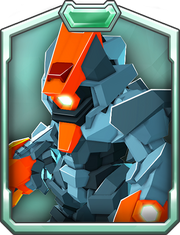 Starshot is the second SENSO throughout the game, unlocked in Twin Temples.

Starshot is a ranged salvo unit with high damage and high health. Since it has the highest damage out of all other SENSOs, Starshot is skilled at destroying enemy units. Starshot is best suited to deal with important targets, thanks to its above average effective range. Starshot can also deal with armored targets thanks to its salvo trait.

This achievement is very easy to complete, as Starshot can easily destroy enemy units with its high damage.

Starshot has 315 health and 118 damage at level 3, destroying these units, ignoring armor or evasion, in one hit: