"Four launchers but it fires 3 rockets... twice. The mystery of the century." 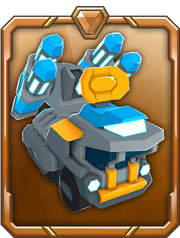 The Striker is a rare unit unlocked in Twin Temples.

The Striker is a mobile, ranged salvo unit with high health. Its high movement and range make it viable for pressuring entrenched units. Alternatively, its salvo trait can shred armor for the rest of your team. The Striker excels at dealing with the armored, frontline units while being flexible enough to also dive onto entrenched, backline units.

The Striker's achievement is:

Shred armor with the STRIKER.

The Striker has 164 health and 144 damage total, destroying these units in a full attack, ignoring armor or evasion: