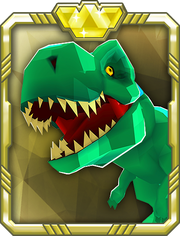 The T-Rex is an epic unit unlocked in Prologue.

Similar to the Jet, the T-Rex is a highly mobile unit. However, the T-Rex comes with higher health at the cost of lowered damage and more combo power. The T-Rex excels at charging into a defensive setup while having enough health to survive a turn.

The T-Rex's achievement is:

Destroy troops with the T-REX.

The T-Rex has low damage, but its high movement lets it rush fragile backline units such as the Ranger and destroy them. If your opponent does not have those kinds of units, the T-Rex can also be used as a finisher.